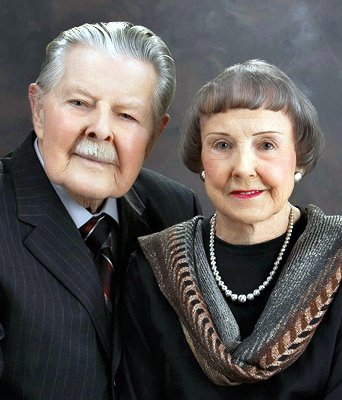 As graduates of OSU, Merrill and Winona witnessed paradigm shifts on the size, scope and mandate of their alma mater, from enrollment as students in the late 1940s to their respective passings in 2014 and 2015.

Oklahoma State prepared them with educations for life. Winona earned a Bachelor’s degree in business in 1947. Merrill studied Chemistry, earning a Master’s degree in 1949 and a doctoral degree in Organic Chemistry in 1952. After Merrill’s graduation, they moved to the Bartlesville area, where he accepted a position and spent his entire career with Phillips Petroleum. Beginning as a research chemist, Merrill developed several patents through the years. He progressed to Director of Consumer Protection, where his department interfaced Phillips Petroleum’s materials, methods and products with the Environmental Protection Agency. The couple raised a family in Bartlesville, where they were active in school, scouting, church and civic organizations.

“Merrill was an outstanding organic research chemist with a distinguished career at Phillips Petroleum,” says Frank Blum, former Chair of OSU’s Chemistry Department. “He was always interested in the department and its challenges and opportunities. He made a point to regularly communicate with me, and I with him. He and Winona were strong and regular supporters. In his work life, I am aware Merrill was welcome at Phillips even after retirement, where I am sure his advice was often sought. He was an outstanding alumnus and emissary for the Chemistry Department at OSU.”

Purpose: This Fund will be used to support the A. Merrill and Winona M. Schnitzer Memorial Fund for Chemistry Research (the “Scholarship”) as described below. This Fund will be managed in all respects pursuant to the OSU Foundation Endowment Management Guidelines attached hereto and made a part hereof.

Selection Criteria: The recipient must be enrolled as either a full-time or part-time student at the University inthe Department of Chemistry. Selection preference shall be given to graduate students. This award is to be given to a student(s) to facilitate continuing chemistry research in faculty laboratories. 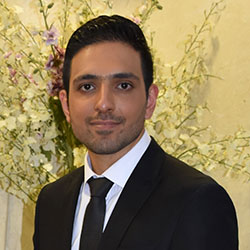 2019 - Ardalan Hayatifar grew up in Tehran, Iran and did his undergraduate studies in Chemistry at Shahid Beheshti University. He began his graduate studies at Oklahoma State in the Fall of 2016, and joined the group of Dr. Charles S. Weinert in 2017. His research has focused on the fluorophilicity of organogermanium cations, and he prepared the elusive branched oligogermane (Ph3Ge)3GeF, which our group had been trying to isolate for six years, three months after joining our team (Organometallics 2018, 37, 1852). He extended this research to develop a new, simple, transition metal-free hydrodefluorination process for acid fluorides and organofluorine compounds that was the focus of a recent communication and was featured as the cover art for the issue in which it was published (Chem Commun. 2019, 55, 10852, see it here). Ardalan passed his Ph.D. qualifying exam this past year and is currently in his fourth year of study at OSU. In addition to his research prowess, he has been regarded as a highly effective teaching assistant by his students. Ardalan plans to pursue an academic career after graduation from OSU. 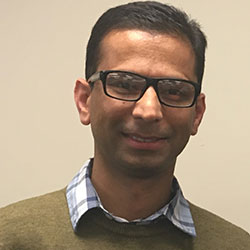 2018 - Santosh Adhikari was born and grew up in Pokhara, Nepal and did his BS and MS in Chemistry at Tribhuvan University. He moved to Oklahoma State University in Fall 2013, joined Dr. Toby L. Nelson research group in Spring 2014, and earned PhD degree in Chemistry in Summer 2018. During PhD degree, his research was focused on elucidating and enhancing the properties of naturally occurring Eumelanin by methodically modifying the structure of Eumelanin-inpired indole building block developed at Nelson group. He utilized this building block in synthesizing conjugated oligomers and polymers as bio-inspired organic semiconductors which has been published in Journal of Materials Chemistry C 4 (18), 3995-3999 and Journal of Polymer Science Part A: Polymer Chemistry 55 (3), 457-463. He further extended the eumelanin-inpired conjugated oligomers project and developed eumelanin-inspired antimicrobial agent that has biocidal activities against MRSA. This discovery has recently filed for provisional patent. In different project, he also developed organic electrically conductive fibers by using very facile fabricating technique for their application in the medical field and smart textiles which lead to one publication (Industrial & Engineering Chemistry Research 57 (23), 7866-7871) and one international patent. These organic ECFs were successfully used to record skin surface biological signals such as electromyogram (EMG) and electrocardiogram (ECG) with signal-to-noise ratios that were similar and exceeded the data by standard metal electrodes. Currently, Dr. Adhikari is working as a post-doctoral research associate at Rensselaer Polytechnic Institute where his research is focused on developing polymer electrolytes for their application in energy conversion technologies such as fuel cell, electrolyser, redox-flow batteries etc. He is now looking for faculty position in the research and teaching institution.