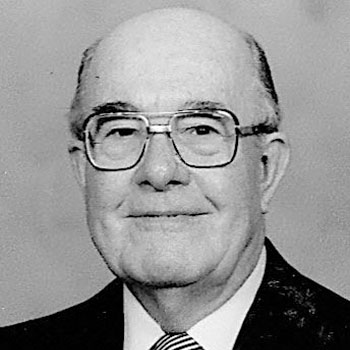 Dr. Ernest M Hodnett was born February 6, 1914, earned an BS (1936) and MS (1939) degree in chemistry at the University of Florida. He matriculated to Purdue University where he completed a PhD (1945) in organic chemistry under Professor Earl T. McBee. He joined the faculty in chemistry at OSU in the fall of 1945. He rose through the ranks to become a full Professor in 1957.

His research embraced several areas actively pursued at the time and included the use of radioactive C-14 as a tracer to study reaction mechanisms. In addition, his investigations focused on the use of the “isotope effect” in the critical assessment of such reaction mechanisms. He was a pioneer in the use of the radioisotope C-14 labeling to evaluate the polymerization of styrenes. Polystyrenes are well known today and are of great commercial value as insulators for houses and in polystyrene drinking cups, to name a few uses.

Dr. Hodnett introduced the first graduate course in heterocyclic and medicinal chemistry, which attracted industrial chemists in the area as well as local students. He was very adept at training his graduate students to not only exercise caution, via good safety practices, but also to think carefully about their research. He was a gentle, kind man who was a good listener and a friendly council to all who sought his advice, especially his graduate students. In the Fall of 1959, following the construction of the new Physical Sciences building, he was one of four senior faculty who moved their research laboratories into the new building.

He retired from OSU in 1979 after 34 years of service. Within a few years after retirement, he moved to Wisconsin to live with his daughter and family. With the passage of time, his health changed and forced the family to move him to Tennessee to an assisted living facility. He passed from this life on January 30, 2014, just 6 days short of his 100th birthday.